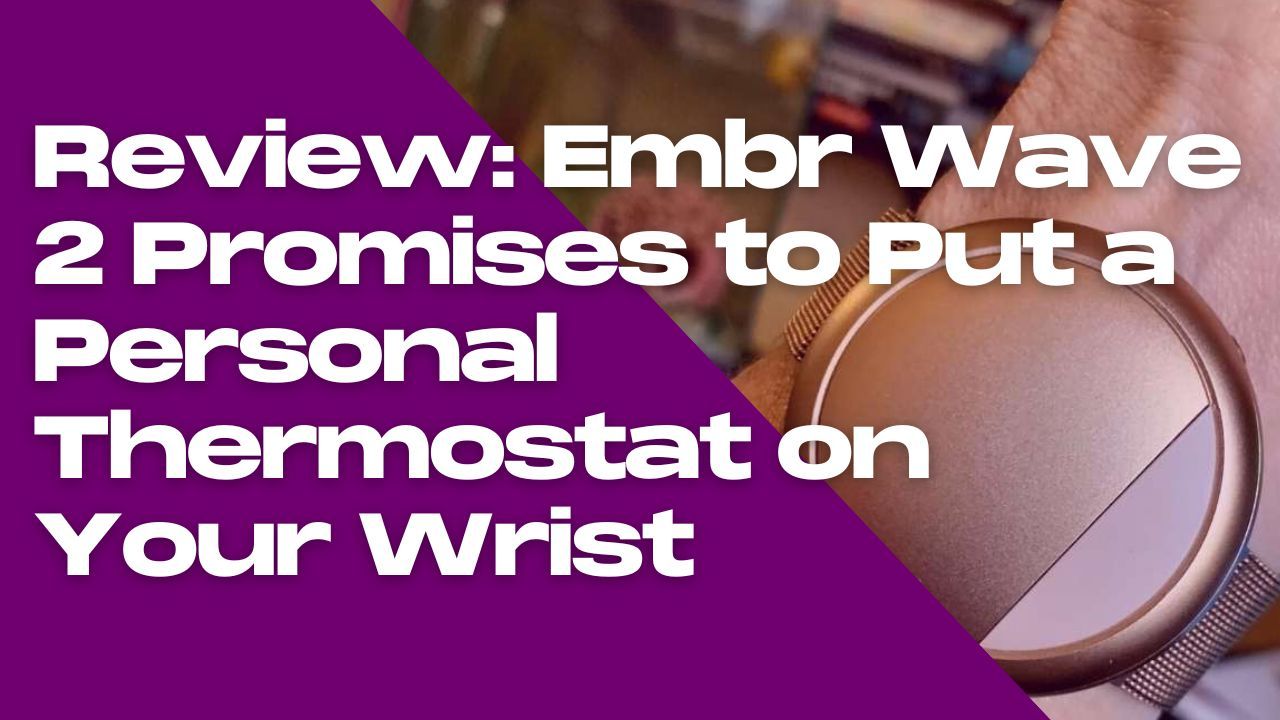 Review: Embr Wave 2 Promises to Put a Personal Thermostat on Your Wrist

This high-end thermal wearable is designed to help you feel cooler or warmer, and lull you to sleep.

Note: This review first published in early 2022. At that time, the Embr Wave was available only through Embr Labs. The device has now widened its distribution and is available at major online retailers, including Amazon, Costco, Walmart, Target, CVS, and others. The review has been updated.

Going through the menopause transition is kind of like a living in the mountains (without the view): if you don’t like the “weather” wait 10 minutes. It’ll change. One minute you can be burning up and stripping down to your skivvies and the next you’re hunting for a fleece pullover.

That’s because estrogen helps regulate your body temperature through a system of specialized brain cells called KNDy neurons that signal to the hypothalamus in your brain. When your hormones enter a state of erratic fluctuation and ultimately decline during the perimenopause and beyond, this system can go haywire, which can trigger hot flashes, sweating, flushing, and chills. It can be maddening during the workday and can wreck your sleep at night as you try to find a comfort zone.

The tech company Embr Labs has been on a mission to change that by putting a personal thermostat on your wrist. I first heard about Embr through longtime colleague and past Hit Play Not Pause guest Dr. Pam Peeke, who is their Chief Medical Officer. The device was originally founded by three men working in a lab at MIT, who were constantly freezing because the lab was so cold.

Being engineers, they did the engineer thing and created a wrist-wearable device to help them feel warmer with the push of a button. They also included a feature to work the other way and help the user feel cooler when it was hot. They released their original commercial device in 2017 and last spring released the Embr Wave 2, a personal cooling and warming wearable they promise can help you perceive your body temperature as up to 5 to 9 degrees higher or lower.

“Perceive” is the key word there. The Embr does not actually change your body temperature. It tricks your brain. As Peeke explains it, Embr works by emitting cold or hot bursts onto the sensitive skin on the inside of your wrist, an area that contains a high density of temperature sensitive nerves called thermoreceptors. These thermoreceptors send a feel-good message to your brain’s hypothalamus to generate a full-body effect causing you to feel warmer or cooler. It’s like the relief you feel when you cradle a steamy cup of cocoa when you’ve come in from the cold or when you rub a piece of ice on the back of your neck on a sweltering summer day. 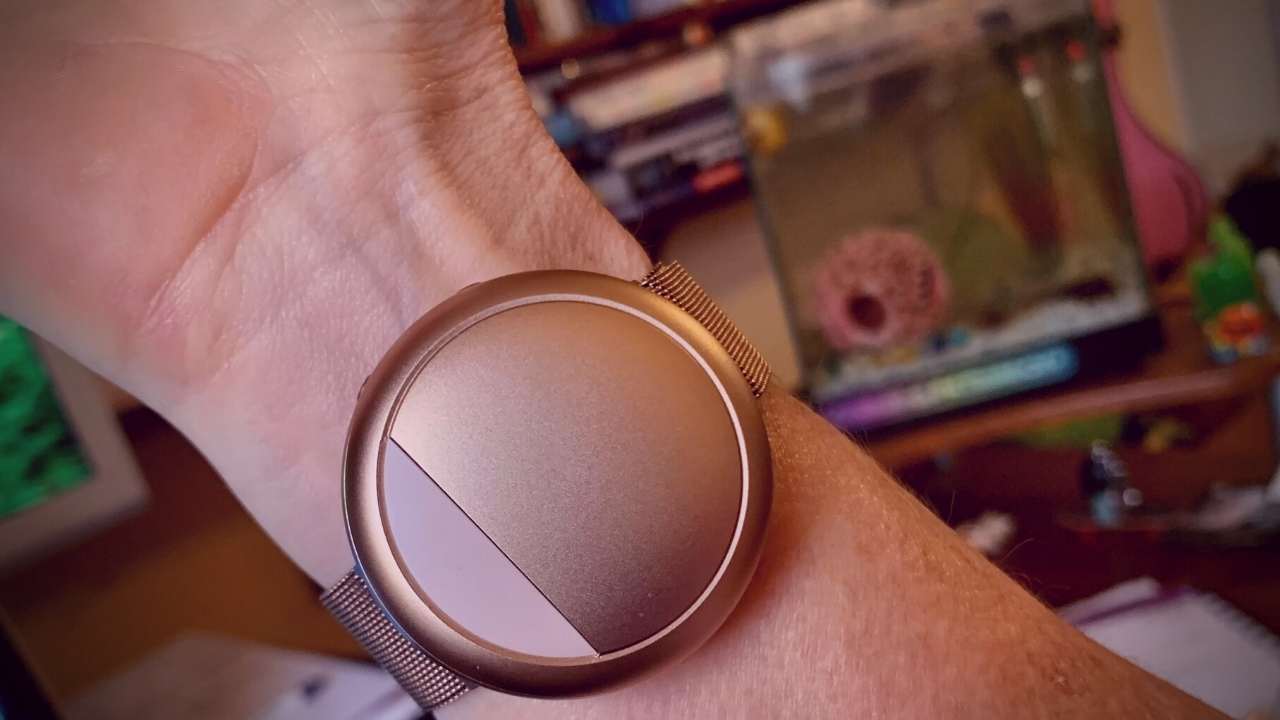 As one might imagine, a temperature-adjusting wearable could be a bit of a hard sell to the general population. But Embr came to understand that some people—like, oh, say menopausal women—battle body temperature all the time. So, they started testing the device for relief from hot flash-related insomnia and in 2021 published a small study in the journal Behavioral Sleep Medicine.

The study included 39 women ages 45 to 58 who were living with sleep-disrupting hot flashes and reported insomnia symptoms. The women completed a two-week baseline period where they filled out questionnaires relating to their sleep and hot flash frequency and severity. Then they used the Embr at night for two weeks and filled out the same questionnaires.

At the end of the study, two-thirds of the group said the device improved their thermal comfort and ability to get back to sleep after waking up during the night. Fewer women reported that hot flashes interfered with their sleep (90% vs. 70%) and about half the women said they felt more control over their sleep disruption from hot flashes, compared to only five percent who felt that way when not using the device. They also experienced a 28 percent reduction in the time it took to fall asleep, a 21 percent reduction in insomnia symptoms, and a 25 percent reduction in daytime sleepiness.

There’s a lot going on there and obviously, this isn’t double-blind, so the women knew they were having an intervention. But after wearing the device for a few days and nights, I can say that I also find that it does significantly improve perceived comfort.

My office is the hottest room in the house in the summer and the coldest in the winter. I’ve become a little obsessed with having this little personal heater on my arm as I type away in the cold, dark, heart of winter in the Northeast. It also helps with the personal heat waves. I no longer get sprinkler-setting hot flashes, but more like sudden warm waves that make me want to strip off my socks (sounds kind of funny, but it works). The cooling pulses from the Embr provide quick relief.

I also really enjoy the cooling effect when I’m working out, especially lifting. I've always run hot, even before my ovaries shut down production, and I always perform better when it's cooler. I've found that when I set the Embr to cool during my lifting sessions, hard sessions feel a bit easier. It's literally all in my head, of course, but much of exercise perception is the product of what your brain is telling you based on a million inputs. So I'll take it.

The sleep setting, which you can set to either cooling or warming, has been a cozy companion to my nighttime reading ritual. I haven't slept a full night with the device on, however, as I don't care to sleep with watches or devices of any kind on my wrist. So I can't speak to wearing it overnight.

Speaking of sleep, the device also connects to an app that allows you to adjust the settings, including temperature level for the heating and cooling, and offers a few preset sessions to explore, including comfort, hot flashes, stress, and sleep, which offer up to 60 minutes of temperature wave pulses (or in the case of the sleep setting, on and off throughout the night). Friend of Feisty Menopause and past guest Amanda Thebe has used that nighttime feature and talks about it here.

Another interesting application of the Embr is anxiety--another common occurrence in menopause. Some reviewers have noted that they find that the cooling sensations from Embr on their wrist help them tamp down waves of anxiety when they start to swell.

The only downside to the user experience for me is the profile is a bit thick. Though I like the way it looks (I have the rose gold model), when it’s on the inside of my wrist, it scrapes against my laptop and/or desk as I type (and being a writer, I type most of the day). So, I’ve found that I need to flip it around and wear it like a standard watch until I want to activate it. Then I move it to my inner wrist and adjust my work position to have it interfere less. It’s also a little heavy, but I got used to that before too long.

The Embr is also not inexpensive. High tech tends to come with a high price, and that’s true here. The device retails at $299 on Amazon. Whenever I review something that I have received at no cost to myself as a test sample I evaluate it through my “would I pay for this?” lens. (And to be 100% transparent if that answer is 100% no, I generally don’t bother writing about a product.) In the case of the Embr I don’t have an easy answer.

In my current circumstances, the answer would be no. As much as I’m very much enjoying it, I am self-employed and work in a home office, so I can work in my jog bra and bike shorts (and have) if I want. I have my sleep dialed in. And I have a lot of control over my ambient environment. If I can’t take my office anymore, I move to another room. If my circumstances were different and I was still working in an office and/or really struggling with symptoms around thermoregulation, I might consider it. If you think it sounds like something you’d benefit from, they do have a 30-Day Satisfaction Guaranteed Return Policy, so you can get your money back (minus shipping) if it’s not what you were hoping for.

On a final note, I just love that this thing exists. This type of technology is only going to expand and improve, and I appreciate that companies like Embr are bringing in women like Dr. Pam Peeke and trying to address our specific needs. Whether or not the device is for you or me personally, that feels like progress.