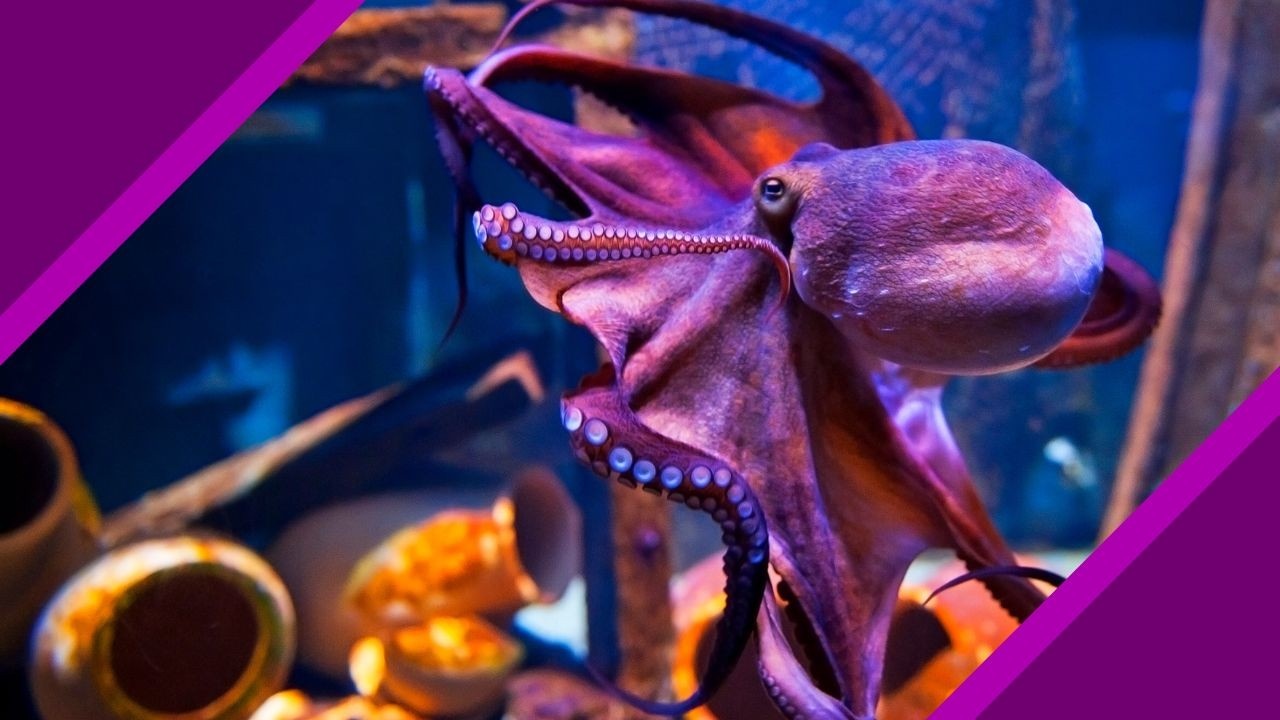 Octopuses are curious, intelligent, never static, and the perfect way to mark menopause.

Somewhere deep into the third hour of laying statue-still as Mariah’s talented young hand guided the tattoo gun along the skin that wraps my left shoulder, injecting swirls of black ink outlining her artistic creation, my Oura ring had registered that I’d taken a 43-minute nap.

“That mindfulness shit really works…” was my first thought as I saw the “nap detected” alert on the Oura ring app after the outline was complete with four hours of time under the gun. My mantra as I managed the searing pain, not unlike a hot Exacto blade carving flesh, was “It stings. But I am strong” over and over while inhaling and exhaling slowly and deliberately.

Mariah, the bright, fully inked artist who I’d commissioned for this work, and I chatted off and on during that Thursday afternoon. She had just discovered hiking. She was impressed that I was still out there “crushing it” as I shared stories about 90-mile gravel bike adventures in Montana and mountain biking in BC. We developed a fast mutual admiration.

I shared some of my other tattoos, a small frog I’d gotten after my first ½ marathon; a woman holding the world in her palm when I’d landed my first dream job; a colorful little elephant that served as a lucky mojo as I embarked on mountain bike stage racing around the globe, and the funky M-dot covered in tropical flowers that was a celebration of finishing Ironman World Championships in Kona. Each had their story, had marked – literally – a place of importance in my life.

She asked about the octopus. She probably regretted it. I turn into a veritable cephalopedia of fascinating octopus facts at any inkling of interest.

“They have three hearts and nine brains!”

“They can solve complex puzzles and use tools!”

“They can be clever and playful and have lots of personality!” (Yep, I might be anthropomorphizing here…but read Soul of an Octopus and tell me otherwise!)

“But maybe most importantly, they’re never static…they’re shape-shifting creatures who adapt and evolve to their environment.”

I didn’t mention menopause at that moment. Not out of embarrassment or shame or stigma, but because I didn’t feel like talking about work right then, and menopause has become a bit of my life’s work. But my octopus is most certainly a mark of my menopause. (Which I did share during the third hour of our second session. She was genuinely moved…and I was moved that she was moved, a nice moment.)

Marking the Passage of Menopause

We celebrate, or at least mark, a lot of important passages in our lives. Our first period. Our 16th birthday. Turning 21. Graduations and degrees. Jobs. Engagements, partnerships, and marriage. First marathon or big athletic achievement. Pregnancy and babies.

But menopause? At least in the societies where most of our readers reside, it’s been something to dread and hide. That, as research has shown, can make it worse.

As Dr. Mary Jane Minkin (who was one of our first guests on Hit Play Not Pause) once told Reuters regarding a study she’d led on the cultural impact on menopause, “In societies where age is more revered and the older woman is the wiser and better woman, menopausal symptoms are significantly less bothersome. Where older is not better, many women equate menopause with old age, and symptoms can be much more devastating.”

That’s not saying, “Oh if you just had a good attitude, it would all be fine.” It’s saying that absorbing the cultural narrative that menopause is “bad,” that aging is “bad,” leaves us feeling not just anxious and ashamed, but also powerless when we know that while, yes, there is a lot about the transition that can be hard, there are myriad steps we can take to make it better. And there’s power we can claim in this important transition.

I thought about that a lot as I prepared for a marathon session under the tattoo gun (81/2 hours all said and done). How can I frame this to make it hurt less? How can I use my mind to lessen the pain? What have all those mindfulness and menopause experts said on the show about harnessing the power of our brains?

I knew it was going to hurt…a lot. And I accepted that. I also knew that tensing every cell in my body would make it worse. I considered where I’d direct my thoughts, kind of like how one zeros in on their earlobes at mile 19 of a marathon because they’re the one part of the body not on the verge of cramping. I thought about past mantras that got me through the darkness that comes with endurance racing. “I am strong. I am powerful. I am prepared.” I thought about the power of breath. The power of claiming this thing. And the power of celebrating it, in all its uncomfortable glory. 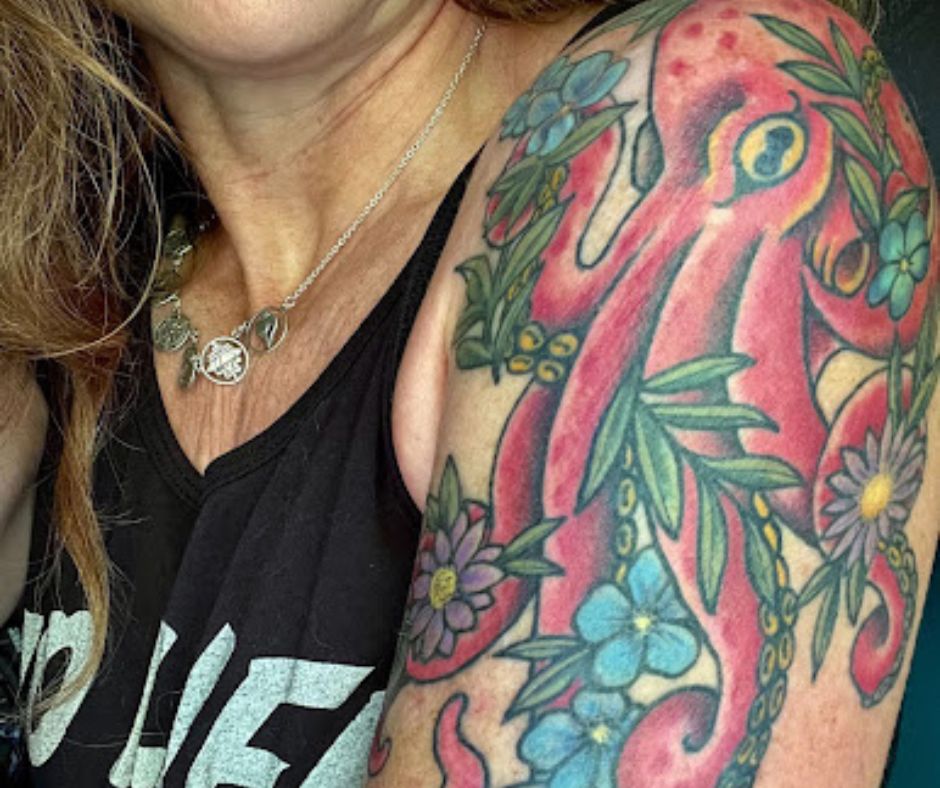 The morning of my appointment, I felt panicky. Was I making a mistake? Would I regret it? My other tattoos are a bit more discreet. This was going to envelop some major real estate. What would (insert all the names…doctors I interview…important people I meet…random people in the universe) think?

But then I thought fuck it. This, like all those other important passages in my life, deserves to be marked…in a major way. To not worry about what others may think. (That’s so late 20s, early 30s…) To not fret over how it might “age.” (My arm’s going to age anyway, might as well have a mascot.) To just take this newfound state of far fewer fucks to give and just go for it.

I put my breathing and mindfulness and mantras into practice and my shoulder in Mariah’s skilled hands. And it was exhilarating. And it makes me so damn happy every time I look at it. It marks my own personal menopause journey in a way that is celebratory and fully my own.

Tattoos aren’t for everyone. But I would encourage every woman to find a meaningful way to mark her menopause, to celebrate this new chapter in her life, even as she may be mourning the passing of the ones that came prior. You’ve made it to this milestone, gaining decades of wisdom and perspective along the way. That’s worth marking. And if you’re still in the perimenopause part of this journey, which is arguably the most challenging stretch, now can be a good time to plan how you’re going to celebrate when you’re through to the other side.

Here's to the next chapter and the adventures and challenges ahead.